As part of our Throwback Thursday series, we are delving into some of the amazing Home Nation moments from the past twenty years. This week we are looking back at Giles Greenwood’s epic Snatch Gold and triple medal haul at the 2002 Games in Manchester. 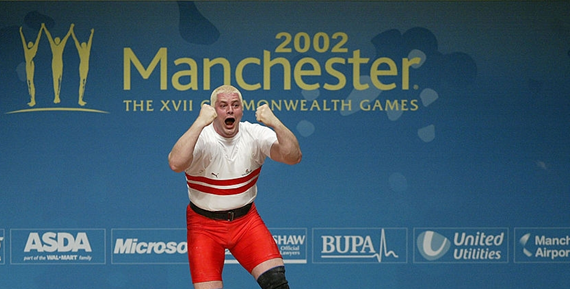 Greenwood, aged 31 at the time, Snatched 180kg in the Men’s 105kg category to obliterate the previous Commonwealth record of 165kg set by New Zealand’s Darren Liddel's four years prior in Kuala Lumpur.

The English lifter then set a personal best to win Bronze in the Clean & Jerk and pick-up Silver overall behind New Zealand's Nigel Avery.

Avery was second in the Snatch but held his nerve to win the Clean & Jerk, and with it, the overall title.

Corran Hocking, of Australia, bounced back from being fourth in the Snatch to win Silver in the Clean & Jerk, and the overall Bronze medal. Team-mate Chris Rae was third in the Snatch.

Greenwood was delighted, particularly as a sore back had hampered his performance.

Speaking after the event he said "I am delighted because that is what I came here for. I thought I could build a lead in the Snatch and maybe hold on for a Bronze medal in the total.

"So, to get a Silver Overall, I am very chuffed with that.

"I was injured for the Clean & Jerk with a sore back, but as soon as I got out there and the crowd started to cheer the pain went away. It definitely helped."