We are highlighting some of the best Commonwealth moments from the noughties and up next we explore how Stewart Cruickshank bagged Bronze overall for England at the 2002 Commonwealth Games in Manchester. 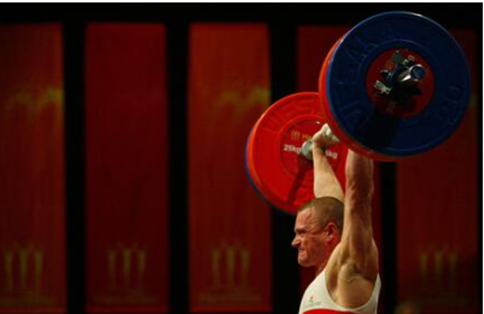 Cruikshank rounded out the rostrum in the Men’s 69kg competition and briefly held a Commonwealth Games record along the way.

Aged 32 at the time Cruikshank, missed his first two attempts at the Snatch but brought the Manchester crowd to its feet when he lifted 132.5kg to set a new Commonwealth record.

The Bisham Abbey lifter’s benchmark was soon bettered, although he still held on to fourth at the interval.

He replicated the finishing position in the Clean & Jerk with an effort of 165kg, but his combined consistency paid off as the total of 297.5kg was enough to secure a stunning Bronze overall.

"I’m over the moon,” said Cruikshank after the event.

“I’m a bit disappointed with the Snatch and would have liked to have a done a bit better but I’ve got the overall award which is the one that everyone remembers."

"I missed my first two in the Snatch which didn’t help but I took the risk to raise it to 132.5kg and it came off."

"I had myself on tenterhooks. The first two I was concentrating for, but I was a bit edgy and I lost them.

"I had to get it otherwise and I wouldn’t have got my Bronze."

Cruickshank was impressed with the atmosphere in the arena.

"The crowd was fantastic. My mum was there and all my mates as well as my people from home and they lift you. You hope it lifts you and hopefully puts everyone else off."

"Staying in the villages is really good too. Everyone cheers each other on. It’s a good atmosphere and all the helpers pat you on the back and wish you luck."

And luck was on Cruikshank’s, with both him and Malaysia’s Hidayat Hamidon totalling 297.5kg in the overall competition.

Cruikshank grabbed the Bronze by virtue of having a lighter bodyweight than Hamidon.

After the event he said: "I’ve lost Gold twice on bodyweight, so I think it’s fair I get something on bodyweight.

"I weighed in light which is an advantage but if you weigh in too light, you lose the advantage.

"I’ve come down from a slightly higher weight and in the last few weeks, I’ve been eating healthily and I’m in the best shape I’ve been in for a long time."

The result ensured Cruickshank medalled at three Commonwealth Games having stood on the podium in 1994 and 1998.